The United Republic of Tanzania is located in Eastern Africa between 29 and 41 degrees east longitude, and between 1 and 12 degrees south latitude. 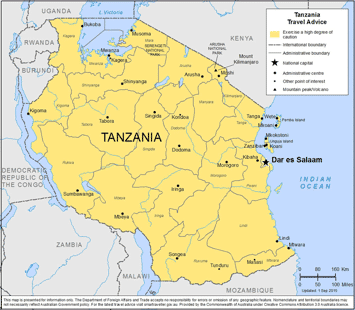 Tanzania has the biggest land area among the East African countries (i.e. Kenya, Uganda and Tanzania).

Tanzania has a spectacular landscape of mainly three physiographic regions, namely the islands and the coastal plains to the east, the inland saucer-shaped plateau, and the highlands. The Great Rift Valley that runs from the northeast of Africa through central Tanzania is another landmark that adds to the scenic power of the country. The country has an enormous concentration of wild animals. It also has pristine sandy beaches and Africa’s highest and snow-capped mountain, Mount Kilimanjaro. Tanzania is home to the world famous National Parksand Game Reserves of:
Ngorongoro Crater, Selous Game Reserve, GombeStream, Tarangire, Lake Manyara, Mikumi, Arusha, Ruaha, Saadani,Udzungwa Mountains, and Mkomazi Game Reserve. Other Game Reserves include: Amani, Kigosi, Lukwika-Lumesule, Maswa, Monduli Mountains, Msangesi, and Ugala.

Dar es Salaam is the commercial capital and major sea port for Tanzania and it also serves the neighbouring land-locked countries of Malawi, Zambia, Burundi, Rwanda, and Uganda, as well as Eastern DRC.
Other sea ports include Zanzibar, Tanga, and Mtwara. Because of its geographical and locational advantage, the port at Dar es Salaam is the gateway into East and Central Africa. Furthermore, this makes Tanzania a logical investment opportunity.

The 2005 General Elections: Since attaining political independence in 1961, Tanzania has held without fail Presidential and Parliamentary Elections (general elections) after every 5 year period. Following results from the Presidential and Parliamentary Elections held on 14th December, 2005, the 4th President of Tanzania, H.E. Jakaya Mrisho Kikwete was sworn into office on 21st December, 2005 for a five-year term of office. Since 1985, Tanzania has followed a two term limit for the Presidency. President Kikwete’s campaign slogan was “New Vigour, New
Zeal, and New Speed: Promoting Better Life for all Tanzanians.” The majority of Tanzanians have been inspired by this and have rallied strongly behind the President. The country enjoys political stability
and all former Presidents, Vice Presidents, and Prime Ministers live in Tanzania and are accorded respect. On 25th June, 2006 President Jakaya Mrisho Kikwete was elected Chairman of the ruling political party (CCM) by its General Congress.

Economic Policy Stance: The Government of Tanzania under the leadership of HE President Jakaya Mrisho Kikwete (popularly referred to as JK) is committed to the pursuit of sound, consistent, predictable,
macro-economicpolicies with low inflation. The policy stance is one of building on the foundations and successes of the 3rd Phase Government (November 1995 – December 2005) and scaling-up implementation and policy
targeting more effectively and efficiently with “New Vigour, New Zeal, and New Speed.” Promotion of good governance, adherence to the rule of law, promotion of private sector development and opening-up new areas with high economic potential are some of the key issues of the 4th Phase Government. Expansion of investments, job creation, export expansion, value addition chains, and scaling-up human capital development are consequent and complementary actions of the policy stance.

One of the key areas of policy focus is promotion of sustained and shared economic growth. The 4th Phase Government is committed to pursuing pro-investment and pro-growth policies. Moreover, the government is committed to promotion of public-private sector partnership and in this regard, the public and private sectors meet under the umbrella of the Tanzania National Business Council (TNBC), a forum of policy dialogueand consultation between the public and private sectors. Academia, research institutions, NGOs, CSOs and others, are also engaged in dialogue via a number of other forums such as the Public

Expenditure Review (PER) designed to promote wider participation in policy discussions. Tanzania has a vibrant national consultative process that cements national unity and social cohesiveness, which ultimately contribute to promoting peace, security, and stability attributes that are important for a conducive investment climate. These attributes, coupled with its vast natural resource base, geographicl and locational advantage, a large domestic market and a labour force, Tanzania is an ideal investment destination. We welcome FDIs, we welcome tourists, and we also welcome joint ventures and public-private partnerships.

Read More About Tanzania on Wikipedia